on the Worcester and Birmingham

Situated on the banks of the beautiful River Severn, visit the ancient City and it's Cathedral, take a tour of the Royal Worcester Porcelain Visitor Centre.

Worcester - Built on the banks of the River Severn the city is famous worldwide for its beautiful porcelain rich in heritage the Cathedral dominates the skyline. Worcester offers a unique shopping experience mixing the high street stores with an unrivalled choice of one-off independent retailers.

The Royal Worcester Visitor Centre - Take a guided around the Centre a learn the techniques of the skilled artists even have a go at painting your own plate. The shops stock a wide range of quality china, porcelain and gift ware with great savings.

Evesham - Situated in the centre of the Vale of Evesham the major attraction is the River Avon and is very popular for fishing, walking and boating. Since medieval times the region well known for its fruit and vegetable growing, especially asparagus and now an annual asparagus festival is held in the town.

Stourport-on-Severn - A beautiful Georgian town located on the River Severn and built solely as the consequence of the canals, The Staffordshire and Worcestershire Canal linked the River Severn with the Trent and Mersey and as a result Stourport became one of the busiest inland port in the Midlands. The town is a popular tourist town with many attractions and events for the whole family.

By Road : If approaching from the South via the M5 motorway exit at junction 7 take the A44 to Worcester City Centre (Whittington Road then London Road).At the traffic lights in Sidbury (opposite Skellerns Motorcycleshop) turn right into City Walls Road (signposted A38 Bromsgrove).

At the first roundabout take the second exit.

After 100 metres you will come to a second roundabout where you will need to take the first exit into Pheasant Street. Drive along this road until you reach a set of traffic lights where you need to turn left into Lowesmoor.Immediately on your right is the entrance to Lowesmoor Wharf sign posted Viking Afloat. Drive in and follow the road round to the left and you will see Viking Afloat at the end of the road.

If approaching from the North via the M5 motorway exit at junction 6 take the A449 to Worcester. Follow the signs to Worcester City Centre.Follow the one-way system to the left (Sansome Walk, sign posted A38).This brings you to the traffic lights at the junction of city walks road and Lowesmoor.

Drive in and follow the road around to the left and you will see Viking Afloat at the end of the road.

By Rail : If you are approaching from Worcester Shrub Hill Railway Station which is the main line station, turn right out of the station and go down Shrub Hill Road. Then go left and walk to the mini-roundabout and follow it round to the left.

Cross Pheasant Street via the pedestrian crossing and turn right. Crossing Lowesmoor will bring the entrance to Lowesmoor Wharf directly in front of you.

Enter and follow the road around to the left and you will see the marina at the end of the road.

By Air : From Birmingham International Airport - You can take a train to Birmingham New Street and then a train to Worcester Shrub Hill (Nearest to Base) or Worcester Foregate and get a taxi to the hire base.

Or you can take a taxi direct from the Airport (About 1 hours journey) Please contact the taxi companies directly for an estimated fare. From Bristol - there is an express coach link between Bristol International Airport and Bristol railway station (Temple Meads) and bus station. Take a train from Bristol to Worcester Shrub Hill train station. You can buy rail tickets on-line at www.thetrainline.com or www.firstgreatwestern.com. 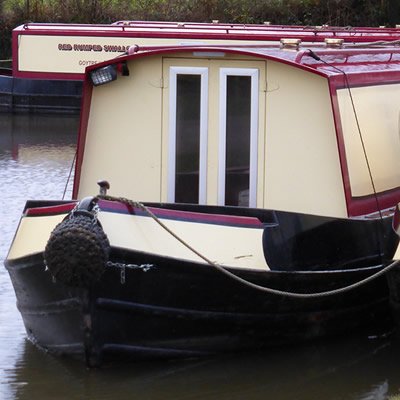